PONY CLUB TETRATHLON - What is a Tetrathlon

Never heard of it? I hadn't!

Pony Club Tetrathlon is very much like Modern Pentathlon, which you may have seen in the Olympics. It provides Members with a challenging competition requiring practical horsemanship, general athletic ability and a steady hand for shooting. Tetrathlon originated as a competition for boys however there are now competitions for girls and for different ages groups.

In Tetrathlon, runners go off at one-minute intervals over a carefully measured course and each competitor’s time is measured. A bogey time is set for the course and for each second over or under that time a number of points are deducted from or added to 1,000 points.

The riding phase usually takes place over fixed cross country fences however, arena jumping can be used as a substitute (See the appendices in the current Tetrathlon Rule Book.)

Where possible Tetrathlon courses always include a gate to open and close whilst mounted, and a slip rail at which the competitor dismounts, takes down the rail, leads his pony or horse through, replaces the rail and remounts. Since Tetrathlon courses should test the ability of the rider rather than that of the mount, it would be a pity to leave these two obstacles out. Perhaps you can use the gate into the field for the former. A small gate mounted on a post with a second post to latch it on to is always a useful item for a Branch/Centre to possess. A slip rail is not difficult to construct, requiring only two poles and two posts and a little simple carpentry.

Competitors will score points according to how far they have swum in a certain time:
Open Boys- 4 minutes
Open Girls- 3 minutes
All Intermediate and Junior Competitors- 3 minutes
Minimus- 2 minutes

Competitors should swim in heats, the number in each heat depending on the width of the pool.

This phase uses any make of single shot 4.5mm calibre air pistol and Pony Club Targets. Competitors each have 5 shots fired consecutively with a time limit of 4 seconds per shot at each target. There is a maximum of 2 targets per competition. 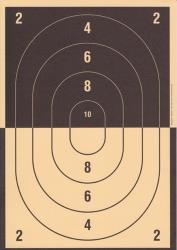 A maximum score is worth 1,000 points. To work out the total points scored by a competitor the marks from both targets are added together and multiplied by 10.